This is adapted from a paper I wrote about 1998 to help clarify a classification system for the field surveys for the company I worked for, ASC Group.

In endeavoring to provide a more comprehensive context for architectural resources, the following method of classifying building complexes and individual buildings has been defined for use in architectural reconnaissance surveys. These "Architectural Location Types" are based on the evidence of historical use, design, accretion, and intention, and not based on less relevant aspects such as current use, size of current property, etc.

A better term than "Architectural Location" would include the idea of being able to inventory all the discrete parts of the entire built environment and modified environment. This would include buildings, structures, sites, and objects, per the National Register "categories of historic properties" (National Register Bulletin 15: 4); where any number of these can be grouped into a recognizable gestalt, a district is present.

These definitions have been drawn from several years of the author's field observations throughout Ohio, and from concepts, terms and observations published primarily in Wood, Brick & Stone - The North American Settlement Landscape, Volume 2: Barns and Farm Structures (Noble 1984); Big House, Little House, Back House, Barn - The Connected Farm Buildings of New England (Hubka 1984); "An Agricultural Settlement Complex in Indiana" (Kiefer 1972); and How to Complete the Ohio Historic Inventory (Gordon 1992). The term "Architectural Location Type" (or "AL Type") is used instead of such a term as "Property Type," which includes such broad concepts as agricultural, residential and commercial uses.

The architectural resources that are the focus of this nomenclature are predominantly "historical," i.e., more than 50 years of age. A better absolute closing date is World War II, which ended many architectural, structural and technological trends (see the discussion under Farmstead). A general term for architectural locations associated with farming, which includes Farmstead, Orphan Outbuilding(s) and Ex-Farmstead is "agricultural complex."

Most of these types are rural; further discussion of the farmstead and other rural place types in a Cultural Resource Management context are in a discussion resulting from a c1999 ODOT colloquium on the Rural Landscape [to be found and hypertexed].

This is simply an independent habitation with no historical outbuildings, or a habitation with a historical garage. (Since the automobile has become an item of necessity and in many cases is actually attached to a house, its presence is not significant enough in this context to merit additional attention.)

Rural and urban houses are included in this type, as well as houses that were formerly parts of Farmsteads or Residential Complexes but have lost all outbuildings and are unrecognizable as an Ex-Residential Complex or Ex-Farmstead.

This is an isolated rural or suburban historical habitation that is less than a farmstead, but more than just a solitary isolated house. ("Suburban" in this case means a location on the periphery of an urban area, between being agrarian rural and urban, and not the modern automobile-based twentieth century suburbia.) It consists of a house and one or more outbuildings (not counting garages), none of which are large enough to be considered a full-size barn. Additional outbuildings can be both agricultural-related and household-related (see the list below for the difference). The surrounding historical plot of land is generally smaller than the average farm, usually between 1 and 40 acres.

This definition is drawn from observations on what buildings were usually present in a typical complex that was apparently functionally semi-independent, but not large enough to support an entire farm. The buildings counted generally should date to before World War II, and always be more than 50 years old. This classification should not include Ex-Farmsteads, complexes that were originally farmsteads but due to the attrition of time, have lost too many of their structures to be considered representative of a farmstead per the below Farmstead definition.

This is simply a Residential Complex that has lost too many outbuildings to be considered representative. However, it may be difficult to determine whether a house has lost outbuildings or never had them.

A "Farmstead," as a specific term used here, is the complex of historical buildings that is an independent rural agricultural settlement. The complex consists of a family residence or farmhouse, buildings and structures that sheltered livestock and crops, and other needed support buildings and structures. The farmstead was the residence, center of activity and headquarters for the farm, which was historically the tract of land that was owned by the family who lived in the farmhouse, and was used primarily for agricultural purposes.

All farmsteads had many small outbuildings used for agricultural purposes, but they have often been lost as casualties of obsolescence, tax and maintenance cost-cutting, need for space, scrapping, and abandonment. A minimum sample of these minor and often ignored buildings is necessary to represent the historical character of a farmstead as described below. Often a minimum sample is the best available.

Farmsteads were constantly growing and changing until the mid-twentieth century, adjusting to the changing methods and technology of agriculture and prosperity of the agricultural economy. The farmstead of this pre-World War II era could be considered the "traditional" farmstead, although scientific methods were readily supplanting folk methods in the mid- and late nineteenth century. Farms varied in their products of corn, wheat, cattle, sheep, etc., and produced any mixture thereof. Thus, the number, use, design and age of buildings composing the typical farmstead was constantly changing, and no exact description can be accurately made for the average American farmstead, for farmsteads in specific regions, or for a single farmstead over time.

When the gasoline engine became common and self-propelled vehicles began replacing animal power, agriculture began to change drastically, and the traditional farmstead changed in several basic ways. This change began probably in the 1920s and accelerated after WWII. Buildings became simpler, larger, fewer and cheaper to build. The new machinery allowed handling of larger amounts of material: hauling by truckloads instead of wagon loads; loading by augers and conveyor belts instead of pitchforks and shovels; bundling as larger hay bales, etc. The equipment became larger, needing larger shelters. The larger buildings replaced the need for many small buildings, and some buildings lost their use, and thus need for existence, altogether. The increasing investment in machinery required decreasing investment in buildings. The increasing complexity and cost of machine maintenance and other farm matters required low-maintenance buildings. The building needs also could be simplified since most were now providing only non-specific shelter for activities, storage or machinery.

The traditional Farmstead is now an endangered element of the American cultural landscape. Due to its major importance in the economic, social and developmental history of the United States (as well as Ohio), architectural locations that fully qualify as farmsteads are given greater consideration during recording in the field and analysis in the office.

The following definition is accurate for the typical nineteenth-century through early twentieth century farm in central and northeast North America, and specifically in Ohio. It represents the minimum criteria for a historical rural complex to be considered a farmstead. This is drawn from observations on which building types were usually present in a traditional farmstead, and how many must still remain to convey the feeling of a working traditional farmstead. The buildings counted generally should date to before World War II, and always be more than 50 years old.

This is a Farmstead that has lost too much of its historical buildings to fulfill the criteria of Farmstead. This classification includes complexes that were originally farmsteads, but due to the attrition of time, have lost too many of their structures to be considered representative of a farmstead (per the above Farmstead definition). This generally includes retention of all necessary elements but one. Such architectural depreciations include the loss or replacement of the primary house with a recent house; loss or replacement of the primary barn; or having both a house and barn but less than two agricultural outbuildings.

If the house was replaced with a new house, the loss of the historical house is too great a damage to the integrity, character and history of the complex to ignore by typing the complex as a "Farmstead." If the primary barn has been lost, there should be clear evidence that one existed originally, and that the complex was not originally a Residential Complex. Large barns, large granaries or silos indicate large-scale agriculture, but if most or all of the minor outbuildings have been lost, the losses of such remnant structures still need to be acknowledged by using this classification.

This is a complex of historical secondary buildings that was originally part of an isolated rural or suburban agricultural settlement, i.e. a Farmstead or Residential Complex, but the historical house has been removed. This also may be a garage lacking its associated house. The removal of a house from its support buildings is symbolic of children loosing their parents, thus the name. An isolated barn may be referred to as an "Orphan Barn" (which was the source of this term).

This is a detached house that is part of a larger complex, usually a Farmstead or Residential Complex. For the sake of thorough documentation, such a house is inventoried on a historical inventory form separately from the primary house and complex as a whole, and the two forms are cross-referenced.

A Component House in contrast to a Subsumed House is still an independant building.

This is an earlier, smaller house that received a larger addition that has left the old part recognizable but incorporated or subsumed into the newer part. This is different from a Component House in that the Component House has remained a separate building. For the sake of thorough documentation, a Subsumed House is preferably inventoried on a historical inventory form separately from the primary house and complex as a whole, and then the two forms are cross-referenced.

Early houses altered in such a way are not always distinct, and recognition depends on the amount of blending of the two parts, the amount of old house covered by the addition, visible evidence of the joining, and/or known history of the house. 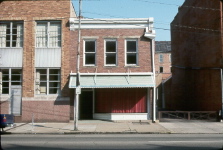 This is a single building built for commercial use as a store. Older examples usually have upper floors that were used as residences, shop space, or storage. There is great variety in this classification, from vertical attached buildings to freestanding sprawl-oriented buildings.

[I need to look into this more: Is this entry needed here? Would it better be a part of the "Buildings" webvolume?]

This is a cluster of houses less than 50 years of age, whether a planned subdivision or allotment, or an unplanned agglomeration of houses. Some recent commercial buildings may be included, especially at intersections.

Since such recent houses are relatively unimportant in an architectural reconnaissance survey, where they are found in groups they are sometimes lumped together as one architectural location to conserve survey time. Unfortunately, this distorts data in the survey that may be useful (such as the ratio of pre- and post-WWII housing).

[I need to look into this more: Is this entry needed here? Would it better be a part of the "Places : Neighborhoods" webchapter?]