The "Foursquare Courthouse" is a unique vernacular American building form that was popular in the late eighteenth and most of the nineteenth century.

Similar to but not to be confused with the Foursquare house type, this is a building form that is two stories tall and cubic, with a hipped roof, that was used for public buildings such as houses of worship, town halls, statehouses, courthouses, jails, schools, etc. (and thus I am tempted to call it the "Foursquare Public Building Form"). It is usually three or five bays and 40 to 50 feet wide, and the same in depth, give or take a bay or 10 feet (Ohman 1982: 171t). Frequent embellishments include cupolas, belfries, observation decks, and spires on the roof crest. The floorplan was often simply one undivided room on each floor, but that could vary. (Since a distinctive floorplan is not a part of the definition, and the exterior can vary within a basic appearance, this is a form rather than a type.)

My interest stems from the fact that my hometown of Chillicothe had an early version of a foursquare courthouse (on the right), which also served as the first statehouse of Ohio. That building is said to be the model of a courthouse still standing in Indiana (on the left) that served as that state's first capitol, too.

Ohio was a hotbed for the form, as witnessed in 1845 images of foursquare courthouses from the first volume of Howe's Historical Collection of Ohio (along top). A collection of images are available in Gallery 1 and Gallery 2.

The form was possibly introduced to America in use as a meetinghouse - or it evolved here out of Puritan simplification of houses of worship - because the earliest known examples were early seventeenth-century New England Protestant churches (Sweeney 1993: 61c2t). The form was apparently tranferred to New England town halls by the start of the eighteenth century, and then somehow became widely dispersed through the Ohio River valley, Old Northwest, midwest (and even Texas) as a courthouse form after 1785. The reason and agent of dispersion is unclear (Ohman 1982: 171m-172m; Sweeney 1993).

Another version of its origin attributes the English market hall as the origin of the Foursquare New England meetinghouse, or at least a one-story version - but still doesn't explain the diffusion of the Foursquare form in America. Whiffen & Koepper (1981 pp 13-17) state:

However, a distinctive solution to the architectural problem, which was to provide for secular meetings as well as religious worship with a building that should be both the symbolic and the physical center of the town, came into use around the middle of the [seventeenth] century: a square [one-story] structure with a high hipped roof surmounted by a platform and a belfry, its interior a single room with fixed benches and more often than not one or more galleries.

first Boston Town House, built in 1657-58, was a substantial example on this side of the Atlantic.) In the meeting house there was no function for the open ground story and it was therefore omitted - much as in the Early Christian basilica of Western Christiandom the galleries of the Roman civil basilica were omitted for want of a function.

The English market hall was itself an adaptation of a type of house, built in England from Anglo-Saxon times to the fifteenth century in both town and country, with the living quarters on the second floor above a ground-floor storage cellar; in the market hall the walls of the cellar were omitted.

Jean Manco, in her excellent website Researching Historic Buildings in the British Isles, has a webpage on Market Houses and Halls. She writes:

This provided a covered area for vendors on the ground floor and a guildhall, town hall, moot hall or tolsey above. This plan can be traced back to the Palazzo del Broletto in Como, Italy (1215), but there are no British examples before the 15th century. The market house could serve many purposes. A small town might have no other public building for centuries, so it could house a Tudor court, Civil War armoury or a Victorian policeman. Civic functions, court sessions and public meetings could be held there. It could even double up as a school or jail. The typical structure was an open, arcaded ground floor with one or more storeys above. 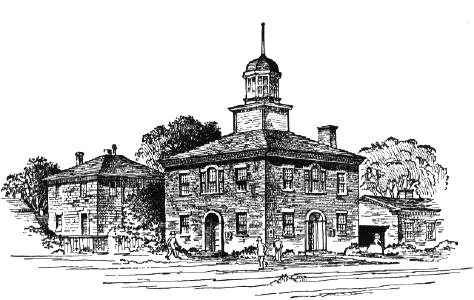 The Foursquare Courthouse form was simple and easy to build, especially for inexperienced or untrained builders. Yet, it was imposing to the public, and fit well into the courthouse's frequent position at the center of a public square.

It was also simple and appealingly domestic. The form also allowed various floorplans inside it, and could be used for various public uses (Ohman 1982: 188-189).

"The foursquare courthouses were not only an important element of midwestern vernacular architecture but also a highly visible part of the evoving urban landscape" (Ohman 1982: 189).