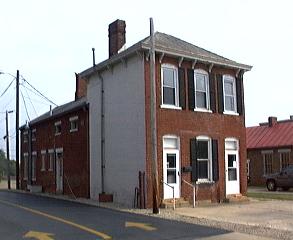 Brewmaster's House to be Demolished

The house at 51 East Water Street is set to be demolished for an expanded drive-through for the neighboring Oak Hill Bank. The Design Review Board gave approval to the request in its August 17th meeting.

The August Wagner Brewery was demolished about 1987 to make way for the building that houses the Oak Hill Bank (and Cristy's Pizza). County Treasurer Jerry Byers owns the property and made the request for this demolition. He also had the brewery demolished. Although this property is outside of the Preservation District, the Design Review Board is charged with enforcement on properties facing the district, which this does. 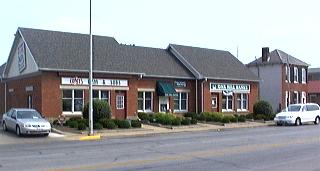 Mr. Byers included a 19-page report with his Design Review Board application documenting the apparent need for expanded drive-through facilities, plans for drive-through expansion, and documentation and rationale for demolishing the house. The last includes a brief history of the house, a statement on architectural significance, and a statement of the applicant regarding the significance.

The statement on architectural significance would be comical if it were not tragic. Architect Michael Noel describes the Italianate styled house as a nonsense "middle-class vernacular Georgian / Federalist home design." He also states "[t]he workmanship and detailing does not represent architecture of significant character." Based on that and the slim history of the house, the applicant states "there was no information found to suggest that the property is historically significant," and writes in bold face that it "is not historically or architecturally significant or otherwise worthy of preservation."

No, not individually. A majority of the buildings in the "Preservation District" are not individually significant. But that is not the point. It is the greater whole that is significant - the combination of buildings - which is being eroded piecemeal. And that is what the Design Review Board constantly fails to see - and to do its duty to protect.

Maintain and enhance the distinctive character of the Preservation District by safeguarding the architectural integrity of the various period structures within it, and to prevent intrusions and alterations within this district that would be incompatible with this established character.

The Chillicothe Conservancy spoke in opposition to the application and had presented two letters. One by Columbus architect and preservationist Robert Loversidge stated

I understand the bank's need to expand, and the importance of bringing many people to this part of the downtown, but, frankly, a three- or four-bay drive-in placed in a large gap in the streetscape, is the antithesis of the important character of the historic district that the DRB is pledged to protect. Please think of the big picture, here, and work with the owner and the tennant to find an appropriate solution to the bank's expansion needs AND the city's obligation to protect its precious heritage.

While this issue may seem to involve only a single rather small building, in fact it is part of a much greater problem. In recent years (and indeed very recently) Chillicothe has lost a number of historic structures. The loss of each may not seem important at the moment, but each demolition is one more piece out of the historic streetscape, and one more step in the loss of the community's character.

The voting to approve the request for demolition was unanimous for all four counts read during the vote: