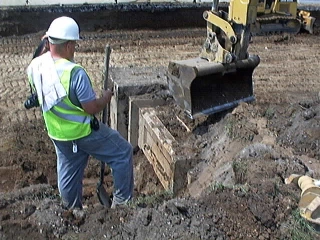 In early May, a Camp Sherman gatepost was discovered along State Route 104 at the north VA Medical Center entrance. It had been tipped over and was buried shallowly right beside the highway. (The edge of the pavement actually went over its tip!) Contractors for the State Route 207 Connector project hit it while excavating, and dug it up, though gouging it up in the process. I wrote an article on it in the last issue.

On August 24th, its partner was discovered. On the other side of SR 104, an identical concrete gatepost was discovered, also lying on its side and buried, and was carefully excavated that day.

Both have been moved to positions flanking the north VA Medical Center entrance, waiting to be re-erected where foundations are being prepared for them. 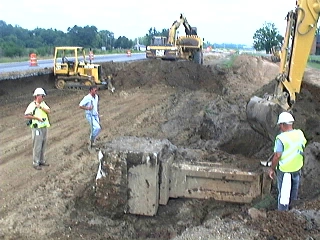 These two were part of a set of four gateposts identical to those at the entrance to Wharf Street, off High Street. Apparently the gateposts were used to control vehicle and pedestrian traffic with the use of chains stretched across the road and sidewalks. The two larger posts flanked the road, and the two smaller ones sat beside the sidewalks. I have heard that there is an article in the newspaper at the time describing the posts. 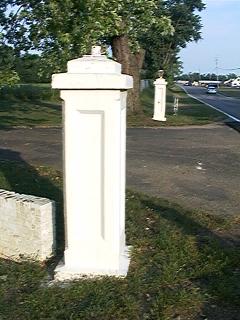 The two smaller gateposts for the northern entrance were apparently moved over to Pleasant Valley Road, where they still stand at the driveway to the former prison warden's house.

I have to admit that I was wrong in my prediction after the first post was found. I figured that it was only a marker of the northernmost extent of Camp Sherman along the road, and that there was only the one. I'm glad I was wrong. 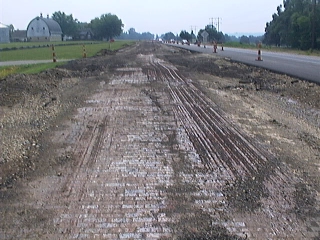 Another find was also made, though it wasn't intact for long. The old SR 104 roadbed has been dug up and carted away along this location, but if you had noticed after the pavement was ground away, it had brick paving underneath.

A 1918 map of the camp indicates that the highway, in the camp known as Columbus Avenue, was a "16 ft. brick paved roadway"