This websection focuses on one form of architectural subterranea, the Sidewalk Basement.

Basement
(From Latin basis, lowest part or bottom; and Latin -mentum, a result or product.) The lowest story of a building, below the main floor and wholly or partly below the surface of the ground (Webster's Dictionary). (See also cellar.)
Sidewalk Basement
Basement space that is built underneath a city sidewalk, in front of the foundation wall of a building (unknown source).

Sidewalk basements are utilitarian underground urban spaces. They were built in the 19th and early 20th centuries (and probably the 18th, too) to be used as storage space, coal bins, elevator shafts, and other uses. Some were designed as basement corridors, and related architectural subterranea include stairs from the sidewalk and windows and doors into basement shops.

They probably evolved from pre-industrial era bulkhead stairs and ground cellars. They are still being built, though now primarily as larger utility spaces for electrical transformers, heating and cooling units, and for utility access.

This researcher became interested in and investigated the sidewalk basements in my home town of Chillicothe, Ohio, for two reasons. I had heard vague tales of an Underground Railroad tunnel running thousands of feet under the main downtown street, connecting many commercial buildings in the downtown, and I was curious and brave (or foolish) enough to want to explore this phenomenon. There was also a "Streetscape" plan that called for new sidewalks in the central business district. Construction work on this was impending, and the plan called for destruction of about half of the sidewalk basements known and located by the engineers.

Most of my observing and recording of them took place during the summer and fall of 1988 while construction took place. After reviewing the Streetscape blueprints, I asked the proprietors of downtown buildings to allow me to check out their basements, and surprisingly, most let me. I mapped out as many as I could, and took black-and-white photos of many. I also photographed the aboveground clues to the existence of sidewalk basements.

The sidewalk basements I investigated are classifiable into two types by roof form: brick arch and stone slab. These may appear to be an earlier and later method of construction, but there is no chronology apparent. The earliest sidewalk basements I know of in Chillicothe date to the 1840s and they are both of arch and slab construction. Even in the 1870s both types were built, even in the same building.

The basements with a brick-arch roof are simpler in construction and appearance, with brick or stone walls rising into a transverse or parallel arch, always with a round vent or solid cover that resembles a manhole cover. The apex of the arch is about seven feet high, and they are never domed. The floor is usually dirt, enriched by coal dust, mold, cobwebs, skeletons of small animals, bottles, candy wrappers, rubbish, brick dust and other items.

Basements with a stone slab roof are less cramped because the brick walls rise to the level of the sidewalk and the roof and sidewalk is formed by a large stone slab, sometimes supported by sections of railroad rail. Circular vents sometime perforate the slabs, and steel doors are common. The floor is usually paved with brick.

Beware of stories of "Underground Railroad" tunnels in downtowns - they often refer to these mysterious, spooky and often sealed-off subterranean spaces that rarely connect unrelated buildings and never extend into the street beyond the sidewalk.

Evidences of Sidewalk Basements and Other Things

As observed in Chillicothe, Ohio and other towns I've visited. Items numbered in Illustration 2 (as continued from Architectural Subterranea). 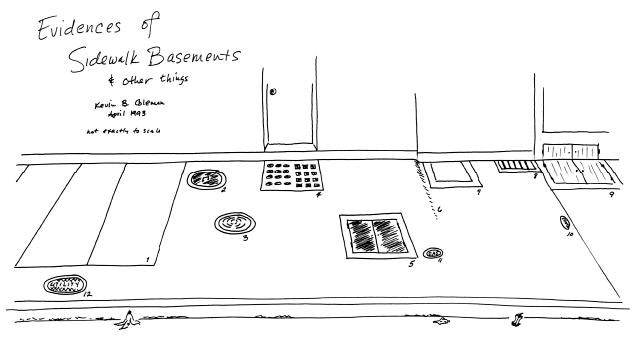 Google searches for the various names for "sidewalk basement" on the internet turned up plenty of relevant sites and pages. They are listed in separate hyperpages.