100, 102, 104, 106 North Paint Street, Chillicothe, Ohio, USA (the three facades on the right side). The Wissler Block was originally built in 1854. In 1875 it was remodeled into a German social hall, with the left part of the trio built new. The sidewalk basements may date to either time. 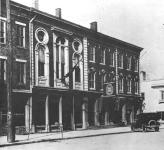 The black-and-white photo was taken during World War I when the hall was an officers club for the army camp outside of town. Underneath the hall facade with the arched windows, you can see pipe railing on the sidewalk along the storefront. This surrounds a stairway descending to the right of the photo into a short hall that enters into the basement of the building. An enlargement of the photo shows the stairway and vault vents. (The stairway does not appear in a photo dated between 1876 and 1882, so it may have been an alteration at the time of recorded remodelings in 1893 or 1918.) 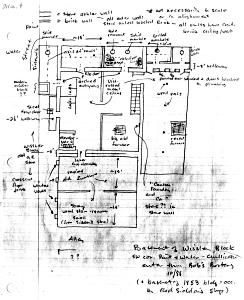 My floorplan of the basement shows the hall and sidewalk basements. The stair led down into a three-foot wide hall, past two six-over-six windows and to a door leading into the basement. Apparently the basement room underneath the one store was also a social or public space, as evidenced by the pressed metal Victorian-era ceiling. This arrangement seems somewhat like the Boston basement bar in the television show "Cheers."

The same ceiling and latrines are in the two rooms to the left in the plan. The brick-arch sidewalk basements were apparently used only as coal bins, and were not a part of the public space. One of them was accessed through a door that led into the hall and under the stair. 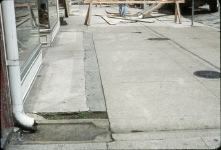 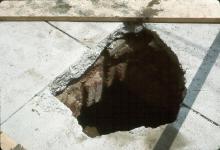 All these sidewalk basements were filled with concrete slurry during the "Streetscape" sidewalk improvements in 1988. Here a "manhole" has been widened with a jackhammer, and the vault has been almost entirely filled with slurry. 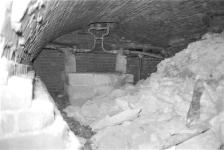 The building for this sidewalk vault was long gone by the time the basement was reopened October 1987 during demolition and preparation for construction of the Ross-Chillicothe Law Enforcement Center just north of the courthouse in downtown Chillicothe, Ohio, USA.

The address was approximately 38 N. Paint Street, just south of the former Kresge Building. The vault had a water line and gas line with meter running through the south (far) end. The gas meter was placed, propped up by concrete blocks, so it could be read through the vault's "manhole cover."

The vault was parallel to the building, as most are, probably to give strength to the building's foundation wall. Note the stepped brick abutment along the lower edge of the right arch. I have not seen this in other sidewalk vaults. The rubble was probably dumped into the vault through another opening/vent barely visible in the upper right corner of the image. 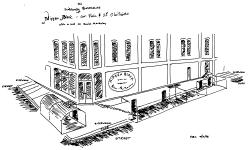 Corner of Paint and Second streets, Chillicothe, Ohio, USA - 1 to 15 East Second Street. The Nipgen Block is one of the biggest historic buildings in downtown Chillicothe, built in 1874 in the grandiose Second Empire style by local businessmen. Surrounding the building and its addition were sidewalk basements of fascinating complexity.

WIth the extensive sidewalk basements and my photos of them, this is a large enough to have its own webpage. 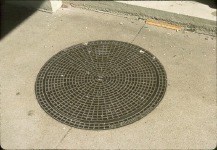 21 East Second Street, Chillicothe, Ohio, USA. This was one of the more ornmented, and larger, of the "manhole" covers in downtown sidewalks. It was probably to a coal chute, since this had a drop-down handle in the center, to allow it to be easily pulled up for coal deliveries. (Therefore, this is not a sidewalk basement.)

The building it belonged to was built about 1888, seen as the almost far-left facade (with the larger reflective windows) in the streetscape image.