Located just beyond the end of Red Bird Lane, within the "Earl H. Barnhart Buzzard's Roost Preserve," outside of Chillicothe, in Scioto Township, Ross County, Ohio, USA - no mailing address, Chillicothe OH 45601. Photo-recorded 1987, 2005. (Click on some images to see them at full size.)

The location can be viewed at the center of a: 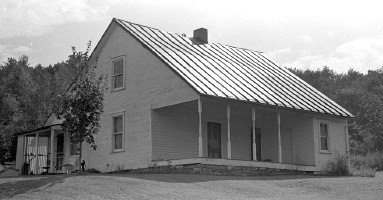 This home began as a two-room cottage with a subtle but surprising amount of fine styling in the doors, windows, and siding. Built between 1849 and 1850, it is one of a decreasing number of surviving early rural homes in Ross County.

(There are several similarities with the county owned Lucy Hayes House at 90 West Sixth Street in Chillicothe, which also could serve as a model of what the Harley's House could become. Additionally, the Chillicothe Restoration Foundation was formed to save the "Lucy House" in 1968.)

Located at the far end of a remote road, this house would have been the residence of a "Ridge Farmer" who was probably content to live at the fringe of settlement. Between 1907 and 1911 it was enlarged with a loft, front and back porches, and a "Creole" roof spanning all.

The house is largely unaltered since its 197-1911 expansion; indoor plumbing was added only in 1981.

The last family lived here in the 1950s, when the property was bought by Earl Barnhart. Half a century later, his widow donated the area to the Ross County Park District as a nature preserve with an emphasis on educating schoolchildren.

The farmstead is denuded, with only the house remaining, and a well or cistern at the east side of the house. It has been uninhabited since 1995. Soon after the property was donated to the Ross County Park District as the Earl H. Barnhart Buzzards' Roost Preserve.

At the time the property became a preserve, "Harley's House" was accompanied by a privy, garage, chicken coop, and shed. These were all demolished and a parking lot built in their place. A barn had stood at the far end of the field behind the house. A second well is still at the south side of the gate just west of the house, about 10-15 feet from the run that crosses the road. 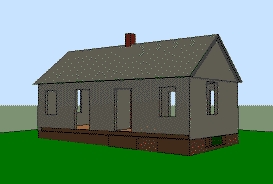 This home began as a one-story, side-gabled, wood frame, two-room (double-pen) cottage. It probably faced north toward the historical and current road. The cottage had a cellar under the east room and a cellar door to it on the north side.

A center cimney made it a "Saddlebag" subtype of the Double Pen Cottage. That chimney and fireplace appear to have been removed, but a flooring patch and brick in the wall indicates a large fireplace and hearth in the east room, consistent with the indicated date of the cottage.

A subtle but surprising amount of fine styling is present in the transitional Federal-to-Greek-Revival-styled six-panel doors, remaining six-over-six window with applied moulded trim, and surviving beaded siding. This stylistic elements indicate the date of the cottage.

Between 1907 and 1911 the cottage was more than doubled in size by the addition of an unfinished loft, front and back porches, front and back "porch rooms," and an enlarged side-gabled roof.

This gave the house the appearance and several characteristics of a French-American house type variously referred to as the "Grenier House," "Acadian House," "Cajun Cottage," "Creole House," or "Gallery House." The primary elements of this house type are:

The house type also has African-Caribbean and Germanic connections. It occurs primarily in the deep south, especially Louisiana, and French-settled-areas along the Atlantic and Gulf coasts. 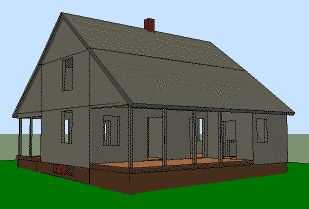 The connection between this house in south-central Ohio and its evident prototypes in Lousiana and elsewhere is intriguing. A few surnames associated with the house have been found, but research is not complete.

The last family who lived in the house, in the 1940s, were the Stoufers (sp?), which appears to be a French surname. They may have been descendants of the owner(s) who enlarged the house.

A.C. Johnson is indicated as the owner of the 83.5 acre "Harley's House" parcel on the 1875 county atlas. (James M. Johnson, probably a brother, or possibly a son or father) owns the adjacent 42 acre Buzzards' Roost proper.) "Johnson" is probably a typical English surname; this also predated the expansion of the house.

One other house in the area shared some of the "Grenier House" characteristics. The Moomaw House had a galerie and grenier, masonry ground floor and wood frame upper stories, porch rooms, and side-gabe roof. It was considerably larger than Harley's House and located in a small valley. It was demolished about 1995 after decades of neglect.

Other "Four-Over-Four Cottage" houses in the area have a few similar characteristics, including a galerie and grenier, and porch rooms, but in a slightly different composition. They are increasingly found west of the area, centered at Hillsboro. This author believes these houses have Germanic and Pennsylvanian origins.

"Harley's House" is the focus of a preservation effort by the author (and ongoing research) and you can read more in an online article on it.