An Introduction (under construction)

These are sometimes similar in appearance to Grain Elevators, but are used to raise, store, and deliver coal. Unlike Grain Elevators, they do no other processing or sorting (I think...). They are typically sawn timber frame (especially earlier specimens), poured concrete, or steel frame. They may hold other than coal...

You may have arrived here from "Coal Tipples" in Grain Elevators: Related and Similar Building Types and Structure Types. 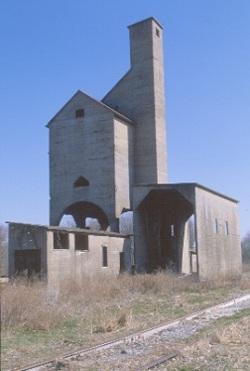 Image borrowed from Bruce Selyem Country Grain Elevator Photographs. Check out his site for display-quality prints of this and many elevators in the Midwest and beyond.

This appears to be a steel-reinforced poured concrete structure. 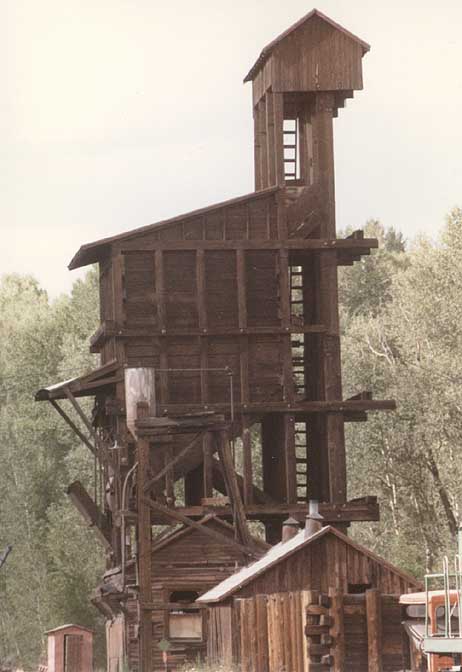 Image borrowed from Sandia Software's website, "Ghost Depot", which features the Coal Tipple at Chama, NM on the Denver & Rio Grande Railroad. The website also offers architectural drawings of this and other buildings and structures on the railroad, especially for model building. 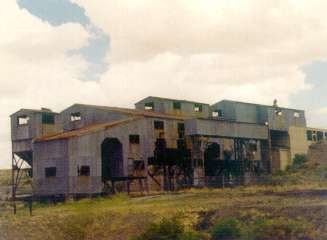 Image borrowed from the Sweetwater Museum's webpage on the Reliance Tipple.

This is representative of the more rambling tipples that seem to crawl down a hillside like a giant mutated bug. ;) 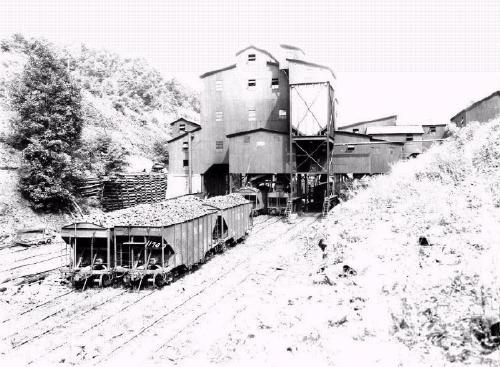 The Booth - Bowen Coal tipple was located just north of Freeman, WV, close to what is now Rt. 52 toward Welch. The Booth-Bowen Coal Company was the fourth mine to be established in the famous Poachontas-Flat Topcoal fields of southern West Virginia. It was started in 1884 with the first mine running near Freeman, WV. A year later William and James Booth, along with James Taylor secured the lease on the land at Freeman, WV, where the Booth-Bowen mine opened. ... In the 1920s William L. Osborne was the superintendent of the Tipple.

The company held 1038 acres of land at Freeman, adjoining to the town of Bramwell. The Booth - Bowen Company operated one mine which was equipped with the most modern mining equipment. The mine had a daily capacity of 600 tons of coal and during 1929 mined and shipped a total of 220,716 tons of coal. The company employed 150 men.

Image and text borrowed from Bramwell, West Virginia's webpage on the Buckeye Tipple No. 1.

This is the Buckeye Tipple as first constructed in the mouth of the hollow (Buckeye Hollow) off Simmons Creek just north of Freeman, West Virginia. ... When Buckeye opened in 1886 it was the fifth coal mining operation in the area. ... About two hundred miners and laborers were employed at the Buckeye Mine, producing some 100,000 tons of coal and 20,000 tons of coke annually. At the turn of the century the operation included two tipples, tenant houses, offices and the modern equipment that made the Buckeye Coal and Coke Company a very profitable coal mining operation.

This 1981 structure is a great example of a modern, high-tech tipple, as described below.

In 1981, Usibelli Coal Mine constructed a new coal preparation/loading facility located closer to the current mining site. The facility, known as a tipple, is a preparation plant which crushes coal and loads it into railcars for shipment to customers. The tipple was designed and manufactured by McNally-Pittsburg of Pittsburg, Kansas and erected by mine personnel. It went into operation in January 1982.

Coal removed from the mining site is loaded into 75 ton capacity end-dump trucks for transport to the tipple, two miles away. ...The crushed coal is stored in an A-frame building with a storage capacity of 13,000 tons. The top story of the A-frame contains a tripper which unloads the coal from the conveyor and distributes it the length of the 110 foot by 200 foot building.

A railroad spur off the main line of the Alaska Railroad runs directly beneath the A-frame through a tunnel. The coal is flood loaded by gravity from the storage pile in the A-frame, into railcar. The railcars are loaded on the move as a locomotive slowly pulls them through the load out tunnel beneath the A-frame. While loading, the train travels at a speed of one half mile per hour. Forty-five 75 ton capacity hopper bottom cars can be loaded per hour. A 500 pound sample is automatically taken from each car for quality analyses in the Usibelli laboratory.

After each car is loaded, it travels over a computerized scale on its way out of the tunnel. The computer keeps in its memory the tare weight, or the weight of each car while empty. It subtracts the tare weight from the gross weight of the loaded car, to calculate the exact amount of coal in each car. The customers can then be billed accordingly.

Immediately after loading, the train travels back onto the main line of the railroad and directly to each customer. Currently, five trains per week are loaded out by the tipple. Most of the coal travels north to customers in the Interior of Alaska, while some occasionally travels south to Ft. Richardson, outside of Anchorage. Beginning in December 1984, three additional trains per week will be loaded out by the tipple and will travel south to Seward for export to Korea.

The tipple has an ultimate processing capacity of four million tons per year if operated twenty-four hours per day, seven days a week. This will easily accommodate the increase in production as a result of the Korean contract. Usibelli Coal Mine by 1985 will be producing 1.7 million tons of coal per year, well below the tipple's capacity.