An esoteric, detailed analysis of a mundane, commonplace thing: roads...

Odology: The science or the study of roads. From the Greek hodos, meaning road or journey (also a partial root for e.g. exodus and method). As coined in Discovering the Vernacular Landscape by John Brinkerhoff Jackson (Yale University Press, 1984), page 21.

An Overview of Early Historic Transportation Systems in Ohio

Though being ubiquitous, significant and extremely influential parts of our cultural landscape, the waterways, trails, traces, roads, canals, railroads, interurbans, and highways that have comprised our transportation systems and structures are often glossed over or ignored in the recording and understanding of the historical built environment.

The Canal in Ohio

Built from 1825 to the 1840s, the Ohio canal system consisted of two main canals and many public and private branch canals, totaling nearly 1,000 miles of waterways with almost 30 different names.

The Ohio & Erie Canal, the eastern of the two main canals, ran from Lake Erie at Cleveland through Akron, Newark, and Circleville to the Ohio River at Portsmouth. The canal was ceremonially begun July 4, 1825 near Newark, but actual construction began at Cleveland. The canal was opened in stages as each was completed; the entire canal, from Cleveland to Portsmouth, was operational in October 1832.

The canal consisted of a waterway for narrow boats, wide enough for two to pass and with a path on one side for draft animals to pull the boats. Where the waterway had to change levels, a "lock" was used that essentially created a hydraulic step upward or downward. The highest part of a canal was called the "summit." Where the waterway met a stream, the canal crossed it on a bridge or joined with the stream. Roads and railroads crossed the canal on overhead or swing bridges.

Railroads were a dominant industry and means of transportation from the mid-nineteenth century through the late post-WWII era. Their significant effects on the landscape, settlement patterns and economy, and their physical remnants and lore are important aspects of geography, material culture and architectural history.

Early railroad lines, like early roads, tended to radiate out from the principal population centers. They also ran north-south like the canals, but the newer systems tended to travel east-west. By 1860, there were four major east-west lines crossing the state, and nearly every substantially sized community had at least one rail connection. Like roads and canals before them, the railroad network influenced the future development of cities and towns (Knepper 1989).

The following definitions, concepts, terms and observations have been drawn from several years of the author's field observations throughout Ohio as a member of a CRM field crew, and from personal observations of parts of the central northeast United States, especially the Old Northwest (Ohio, Indiana, Michigan, Pennsylvania, West Virginia, Kentucky).

Few have been found in published sources. 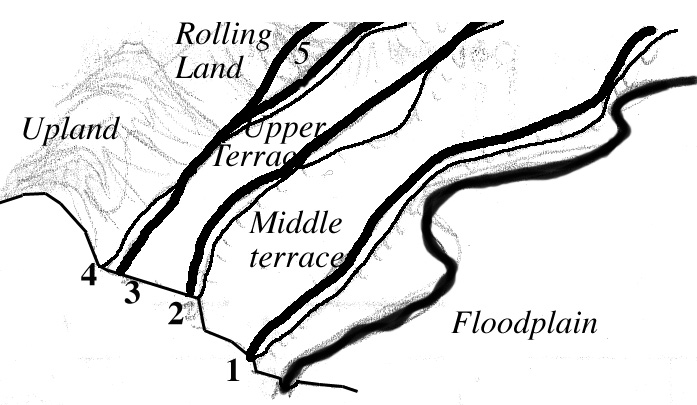